An inclusive and equitable Pacific Society where all human
rights of all persons with disabilities are realised, as outlined in
the UN Convention on the Rights of Persons with Disabilities
(UN CRPD). 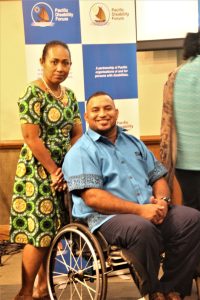 In pursuing its vision, PDF seeks to exemplify the following
values:

To ensure full inclusion and effective participation of persons
with disabilities in Pacific Island countries and Territories
through:

The Pacific Disability Forum (PDF) is a regional non-governmental organisation established in December 2002 and formally inaugurated in July 2004. At the inaugural PDF meeting in Fiji in 2004, members again earnestly discuss the possibility of making PDF a formal organisation and establishing a regional office plan, which was presented at its annual general meeting at the end of 2004. In 2007 PDF was registered in Fiji, following a growing momentum in the Pacific region led by leaders of organisations of persons with disabilities (DPOs) to recognise the potential of persons with disabilities and their organisations.

In 2005 with funding constraints, further consultations were held at a meeting jointly organised by Pacific Islands Forum Secretariat, UNESCAP, ILO Pacific Office, PDF and DPI Oceania. It was at this time that the New Zealand Agency for International Development (NZAID) commissioned two consultants to review what existed in the area of disability in the Pacific region. The NZAID review presented strong recommendations that would give the NZAID Pacific Regional Health Programme a clear, strategic direction for assistance in the area of disability development in the Pacific region for the next five years.

In 2006, the Pacific Disability Forum was affirmed by NZAID as a development partner in disability and development in the Pacific going forward. The provision of core funding by NZAID to the PDF for the 2006-2007 financial year enabled the PDF to establish its Secretariat in Suva, Fiji in January 2007, recruit appropriate staff and implement its plans.

At the PDF General Meeting in February of 2007 in Nadi, Fiji, the first Strategic Plan was developed. The document was revised in 2008 as part of the institutional strengthening activity of the PDF, and a Programme Implementation Document (PID) was developed by the PDF and endorsed by NZAID in June 2008 to formalise a Grant Funding Arrangement (GFA) for the period July 2007 to June 2011. The revised Strategic Plan together with a Monitoring and Evaluation Framework were adopted at the PDF General and Council Meetings in April 2009 in Port Vila, Vanuatu. The grant funding agreement between the PDF and NZAID concluded in June 2011.

In 2010, the Australian Agency for International Development (Department of Foreign Affairs and Trade – DFAT) through its Development for All: Towards a disability – inclusive Australian aid program, engaged with PDF. This engagement focussed its partnership on the strengthening of the capacity of disabled persons organisations (DPO) in the Pacific to be better placed to represent their members and contribute to the realisation of the Rights of Persons with Disabilities in the region.

Australia first engaged with the PDF in 2008 during pre-strategy development discussions and consultations as well as in 2009 when funding was first provided by DFAT. Such financial assistance covered both core and project funding from July 2010 to June 2020.

Skip to content
This Website is committed to ensuring digital accessibility for people with disabilitiesWe are continually improving the user experience for everyone, and applying the relevant accessibility standards.
Conformance status
Developed by AGHAI BRANDING